The Santa Cruz Sentinel has posted my op-ed about the proposed $15-per-square-foot permit fee increase to pay for the county affordable housing program. The SCCG has set up a survey on our home page. There is a link to the survey from the online version of the SC Sentinel article.

My letter to the editor was published in today’s Santa Cruz Sentinel:

Here is the LINK.

On March 17, the Sentinel ran the article “UCSC student eyes long-term goals with summer business.” According to the story, Meagan White, a UC Santa Cruz student, is running her own house-painting business as part of an entrepreneurial training program. In reality she is acting as a salesperson for College Works Painting, an Irvine-based company that runs college painting crews across the country. The Contractors State License Board requires a “Home Improvement Salesperson” registration for door-to-door sales. As of March 25, Meagan White was not yet registered with the board. College Works Painting has a history of such code violations on all four of its California license numbers. Most of our local contractors work hard to stay in compliance with all the rules and regulations. Support your local community by hiring established, local, reputable licensed contractors.

Back In The Black Out On A Limb 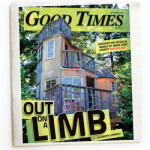 The feature article in this week’s Good Times “Out On A  Limb” is all about tree houses. Back in 1999 Thomas Kern, owner of Santa Cruz County Builders, actually built a tree house here in Santa Cruz. At least one Santa Cruz treehouse has made it into a Nelson book: a nearly 400-square-foot office built on commission by Santa Cruz County Builders owner Thomas Kern in 1999. The Boulder Creek building is perched 50 feet up in a redwood and is reached by a suspension bridge that’s 42 feet high.

The domicile cost its owners $35,000, which Kern says was “pretty much a break-even job in terms of labor and cost of materials.”

“That’s a lot of money to spend on what’s basically a glorified tree fort,” he says, “but if you’ve got the money, what a great way to spend it.”

The full article is HERE

SCCG members on the state of the local construction economy SANTA CRUZ – Local contractors are banding together to survive the worst economic downturn since the Great Depression.

Mike Hartrich, 58, a general contractor in Scotts Valley, started the guild a year ago, as the market for construction dried up.

From January to June this year, 57 building permits worth $49 million were issued, up 10 percent from a year ago.

“All our business is word of mouth,” said Kevin Gallagher of KG Construction in Santa Cruz. “Everybody’s treading water trying to stay afloat.”