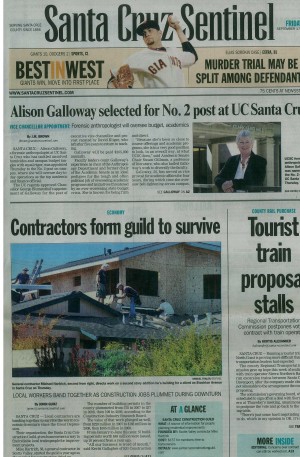 SANTA CRUZ – Local contractors are banding together to survive the worst economic downturn since the Great Depression.

Mike Hartrich, 58, a general contractor in Scotts Valley, started the guild a year ago, as the market for construction dried up.

From January to June this year, 57 building permits worth $49 million were issued, up 10 percent from a year ago.

“All our business is word of mouth,” said Kevin Gallagher of KG Construction in Santa Cruz. “Everybody’s treading water trying to stay afloat.”

Hartrich came here in 1976 from Chicago “with 10 cents in his pocket,” began working in construction in 1980 and started his own business in 1989, with his first project surviving the earthquake and winning an award.

He built the guild website, www.santacruzconstructionguild.com, after taking a course. The site, searchable alphabetically and by trade, costs members $157 a year.

Unlike Angie’s List, which charges consumers a membership fee but is free to service companies, the construction guild information is free to homeowners, who can leave a testimonial and a rating.

Asked why he formed a new group rather than join Think Local First County of Santa Cruz, Hartrich said home improvement remodels are “a natural niche” and noted the guild is a member of Think Local, an organization that promotes local businesses.

“This makes it easy for developers or anyone needing construction work to find locally owned contractors,” he said. “It’s much better than hiring out-of-town contractors.”

Guild membership has grown to nearly 100.

About two dozen are general contractors. Others handle excavation, framing and foundations, plumbing, heating and electrical work, painting, roofing and drywall, carpentry, cabinetry and landscaping. Some specialize in green building or design-build.

Lumberyards such as Scarborough, Big Creek and Monument have joined along with stores such as Greenspace and Las Animas Building Supply.

During the lunch break, Dan Forshner of Santa Cruz, a contractor for 30 years, talked about the benefits of guild membership.

“It’s reassuring to get the referrals,” he said, noting more people search online now when they plan home improvements.

“I’ve had four jobs come through, three from working with members I hadn’t worked with before,” said Hartrich, noting the website has 190 to 300 new visitors a week.

He used to have a full crew; today he does not have any employees but works with two licensed contractors.

“We don’t charge as much as we used to,” he said. “You have to adjust to conditions.”

Still, in many cases, calls have not turned into jobs.

“The economy’s No. 1,” Hartrich said. “People are reluctant to move on big projects.”

Felton resident Mike Grohohl, who’s worked in construction for 30 years, figures that at some point, people will have to undertake repairs they have postponed. 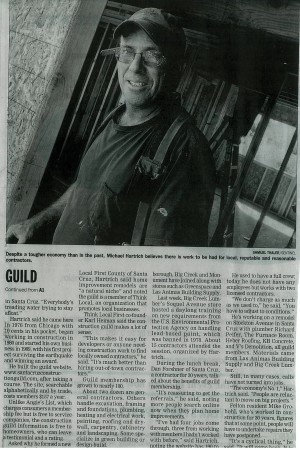